This was a very unique job; the full transcription of two tiny diaries of a First World War soldier called Percy Rainbow. The diaries were only recently discovered by Percy’s UK family and they asked Debbie Frith, our Passionate PA based in Poole (Dorset), to carefully digitally record them so that the diaries could be shared among the wider family who are spread between the UK and Canada.

We have known our client, Dorothy Brown, for a very long time, over ten years. We have done much audio typing for her business over that time so when this special project came up, she knew just who to ask. Debbie has a love of history and is so diligent in her approach to work so the project was in safe hands from day one. Debbie found this project a real privilege.

Percy Rainbow was born on the 18th October 1898. He was a soldier in the London Regiment and worked in the Signals on and around the front line in the area of Arras, in Northern France, in 1918. He was just 19 when he joined the war effort in early 1918 and ended his time in France due to bout of Influenza, for which he was hospitalised shortly after Armistice Day.

Percy kept a daily diary during his time in France, and later Belgium. The diaries are a true insight into a soldier’s life on the front line. He mapped out his entire journey, to some extent his daily duties and the downtime they were able to enjoy too such as going to the cinema and eating ‘Ouefs & Chiffers’ (Egg & Chips) at a local place.

He witnessed some absolutely horrific scenes and was often subjected to bomb blasts but he kept up a surprisingly positive and cheerful disposition despite the hellish circumstances. Percy went onto to serve in Egypt and Jerusalem in 1919.

The most interesting times of the diaries are around August/September 1918. The Armistice Day entry in November is very low key. With the permission of Percy’s family, it is our honour to share this brave man’s 1918 and 1919 diaries.

It took Debbie 10 hours to transcribe Percy’s two diaries. This included photographing every page and researching references and places to add some context to entries. Percy’s family really appreciated this additional information as it provides further detail and brings the diary to life even further.

Dorothy and the rest of the family have said they are delighted with the results and the presentation of the digital document.The family are going to send the digital transcription to the Imperial War Museum where they hope it will be kept in the archives there for all to enjoy.

A peek inside Percy's diaries 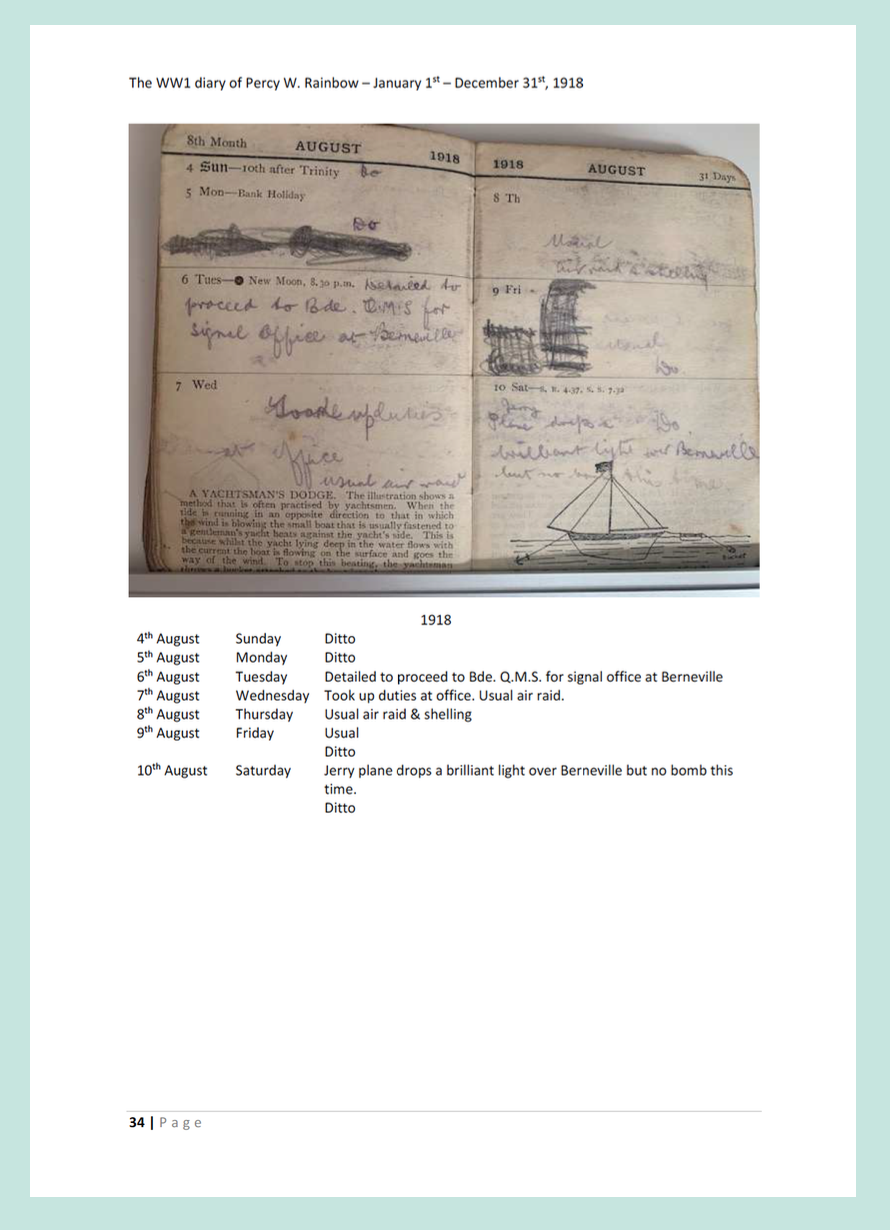 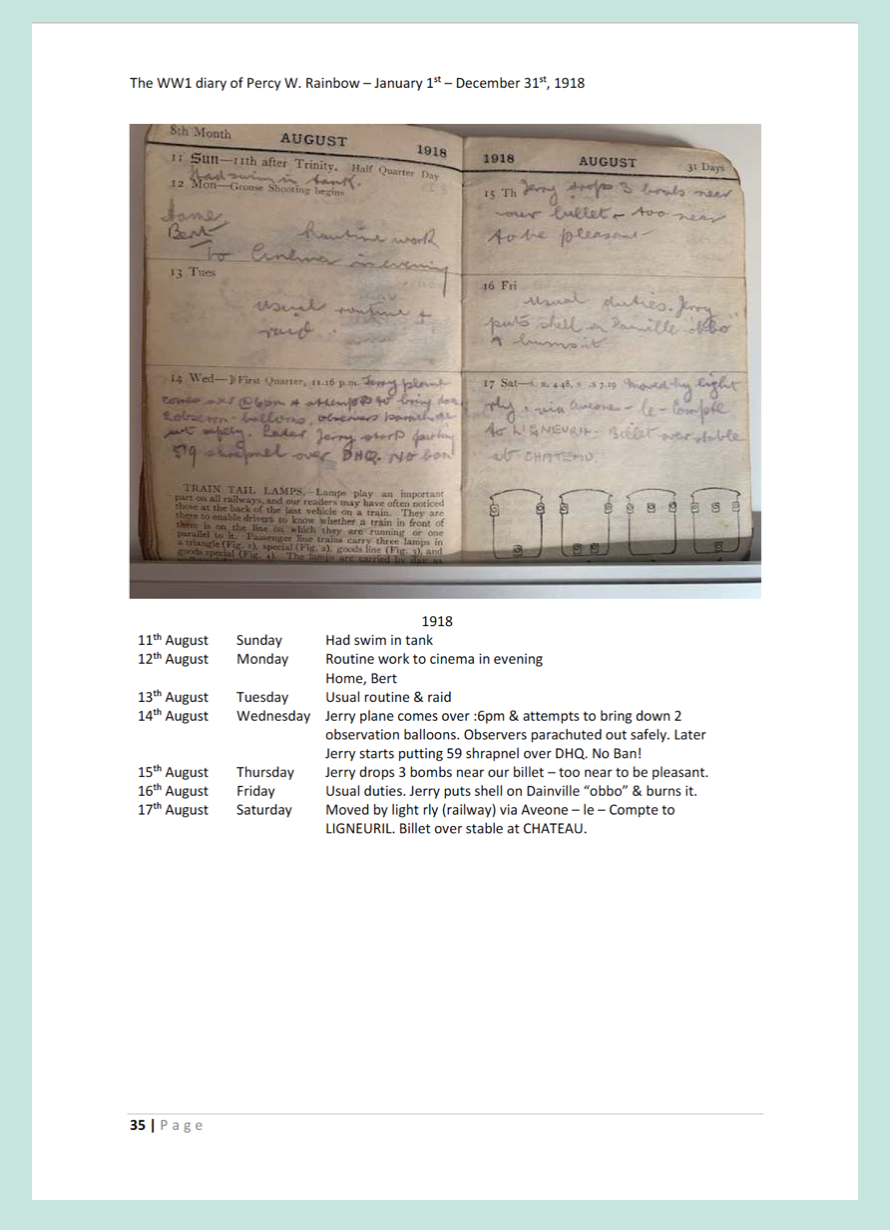 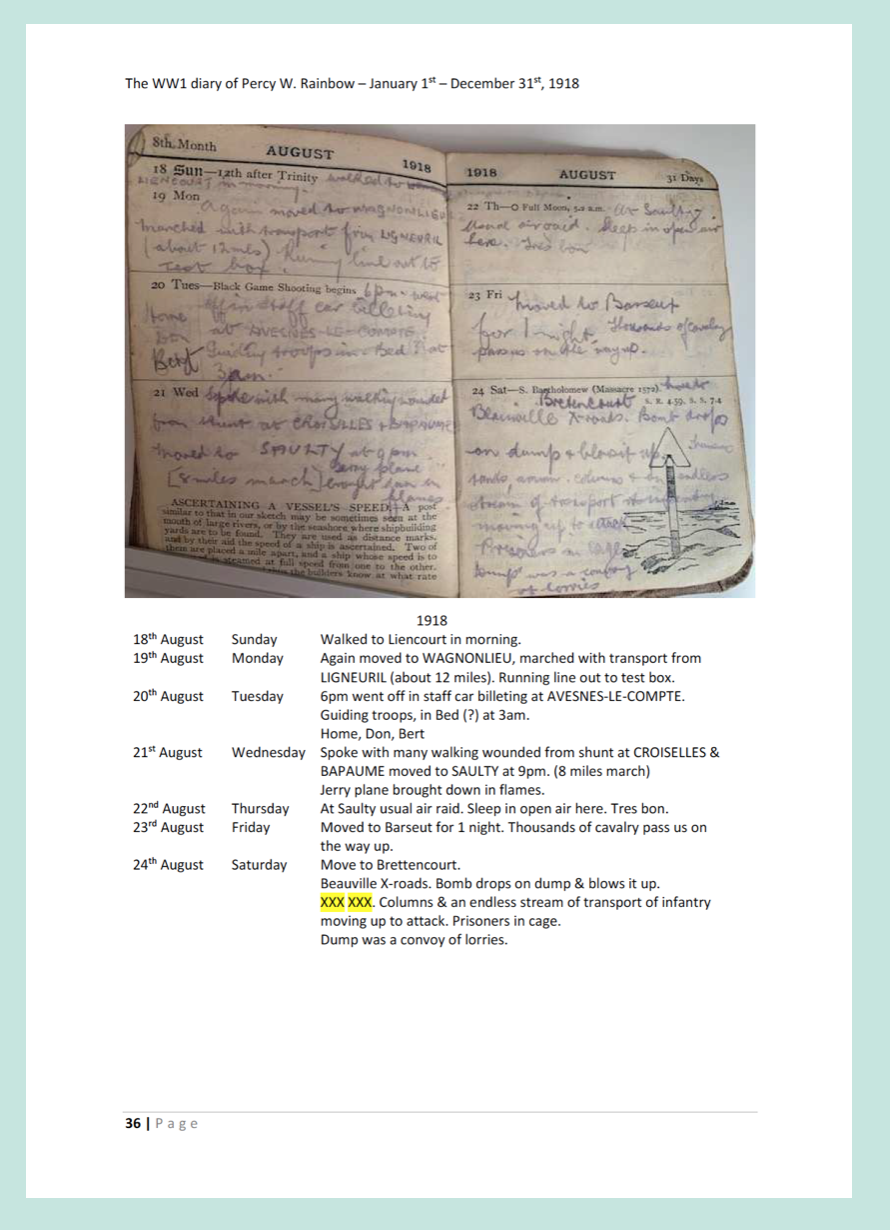 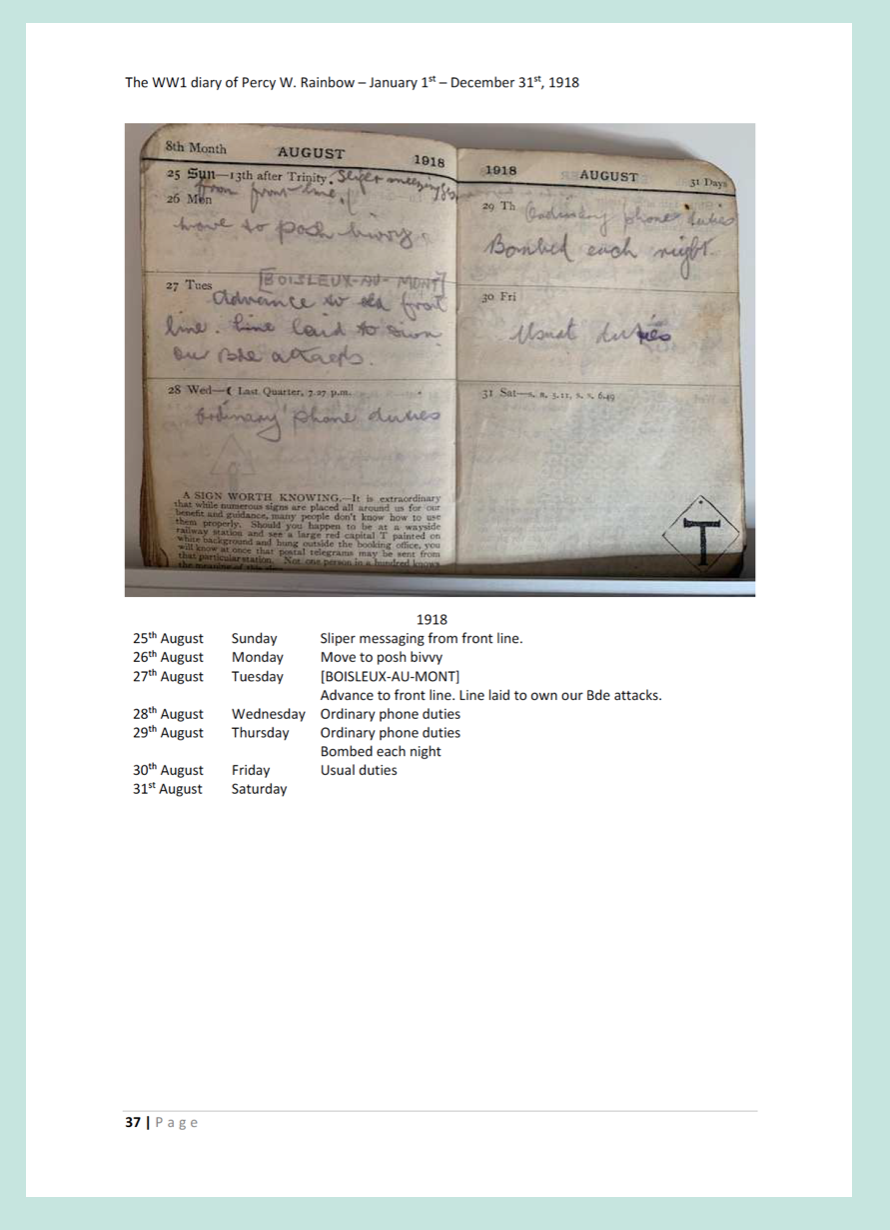 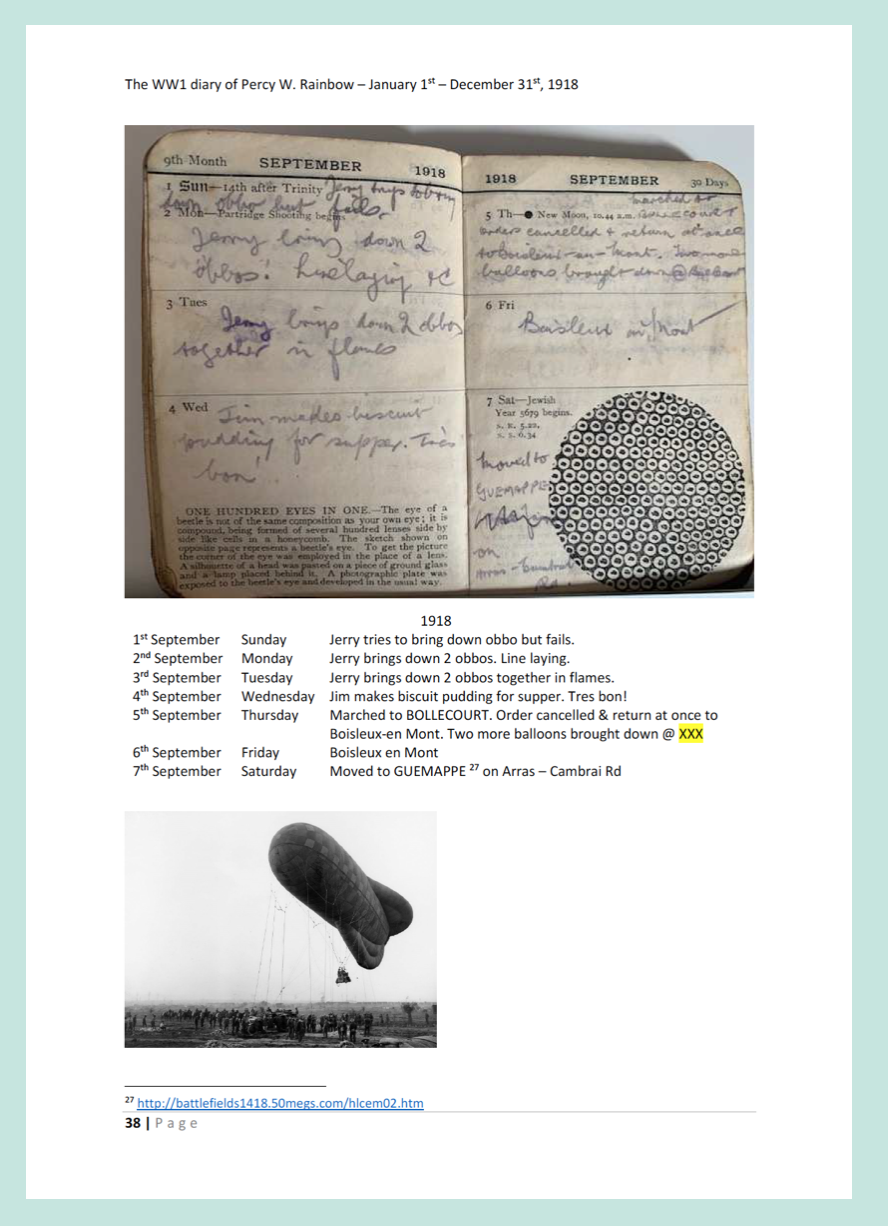 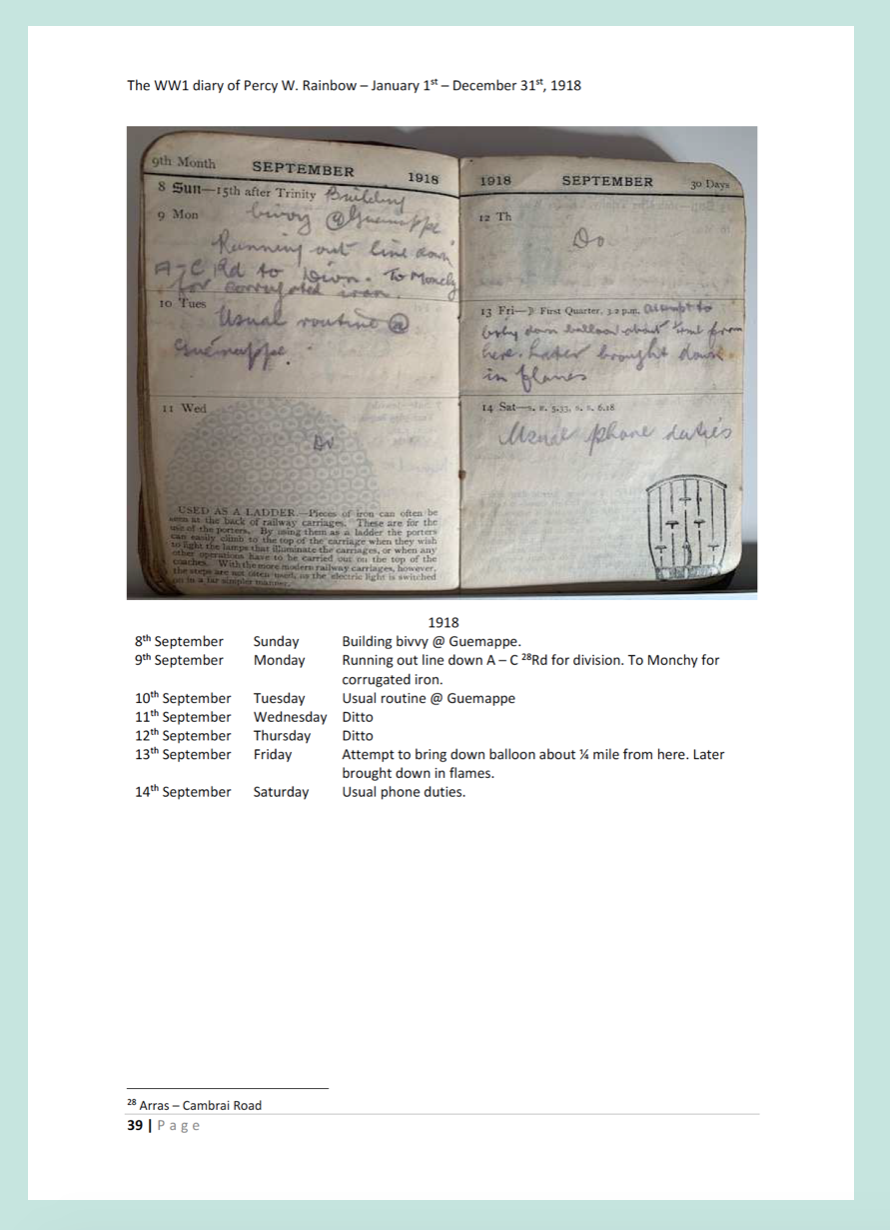 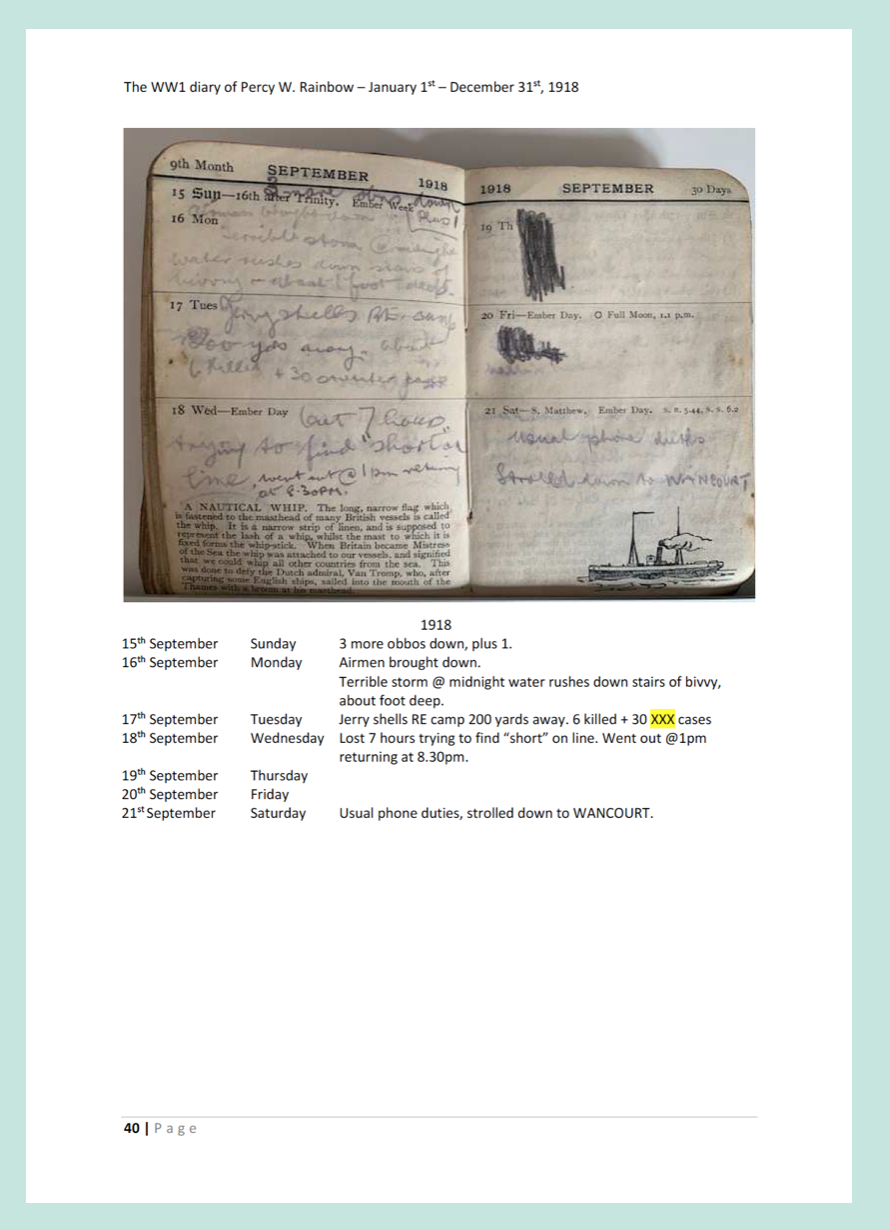 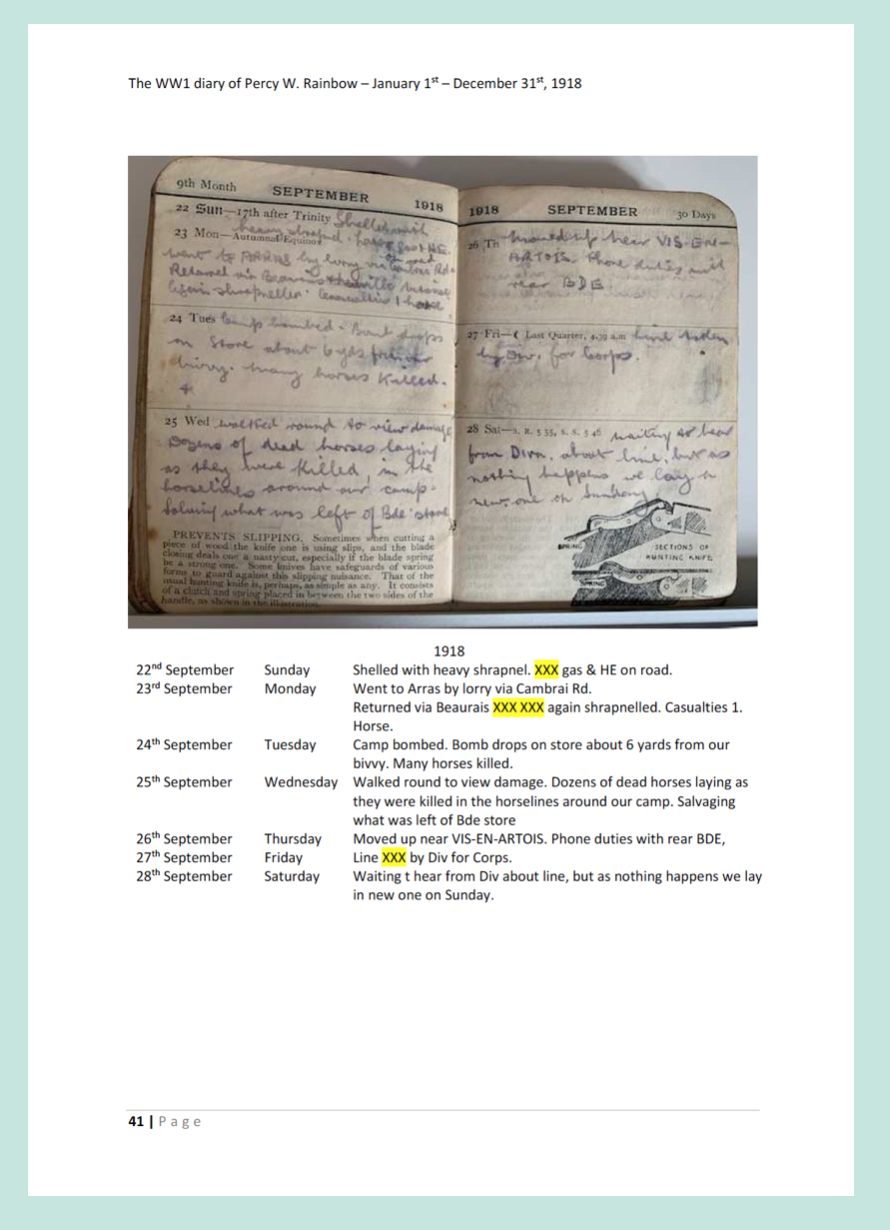 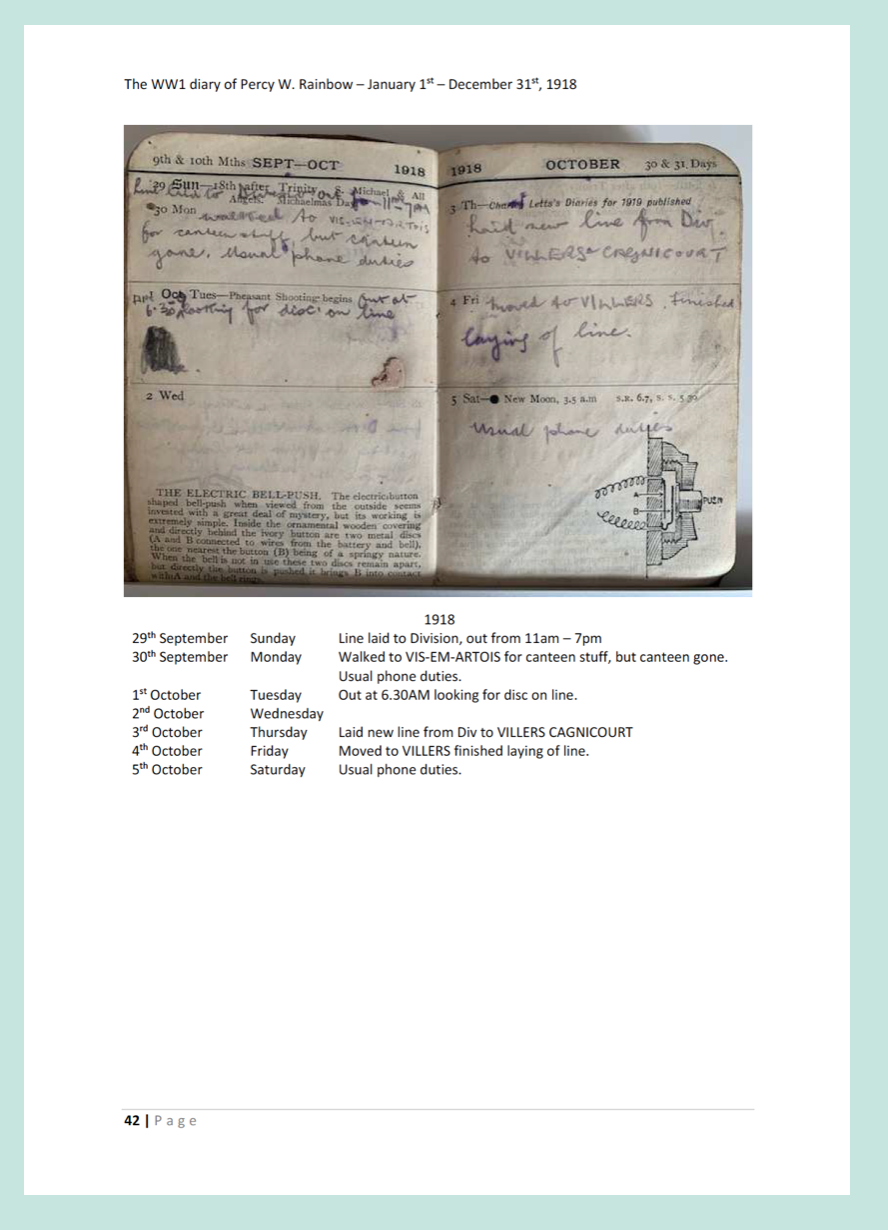 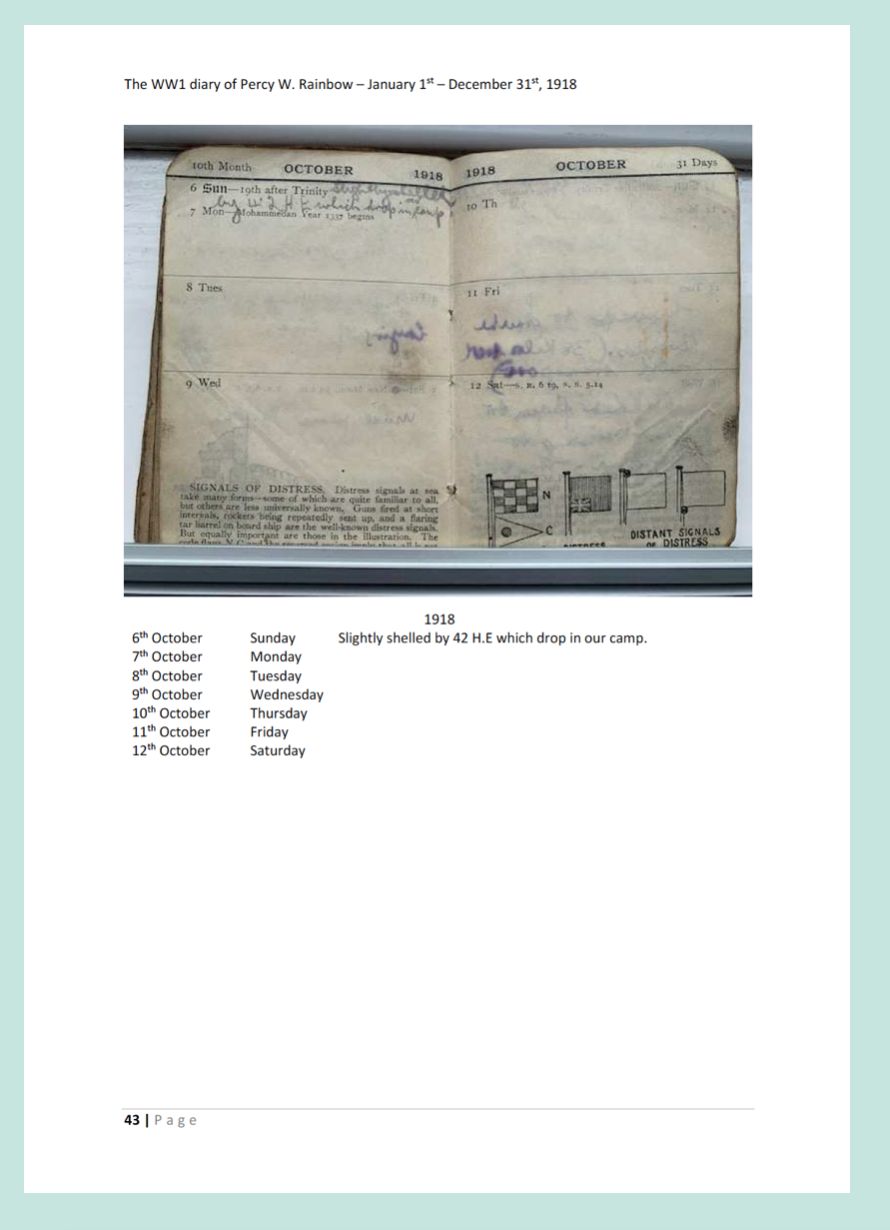 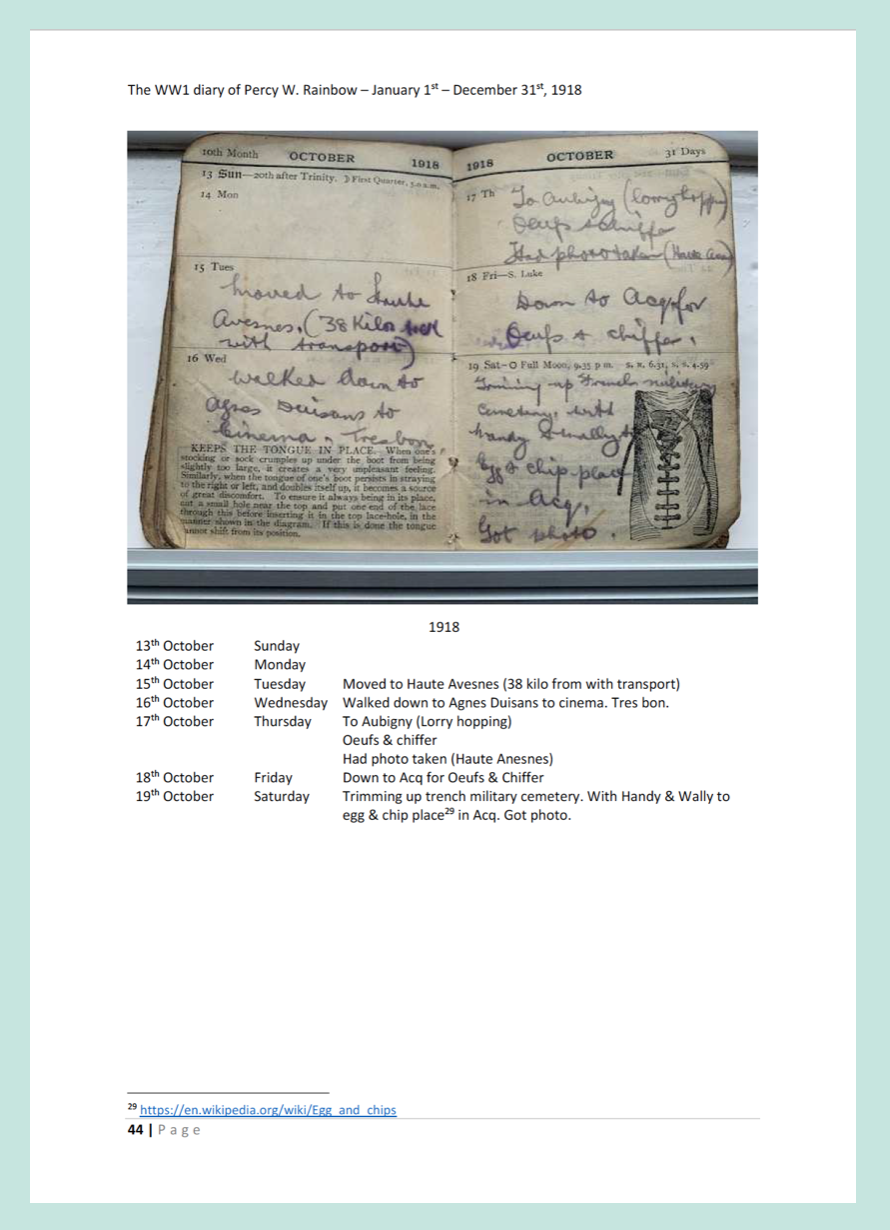 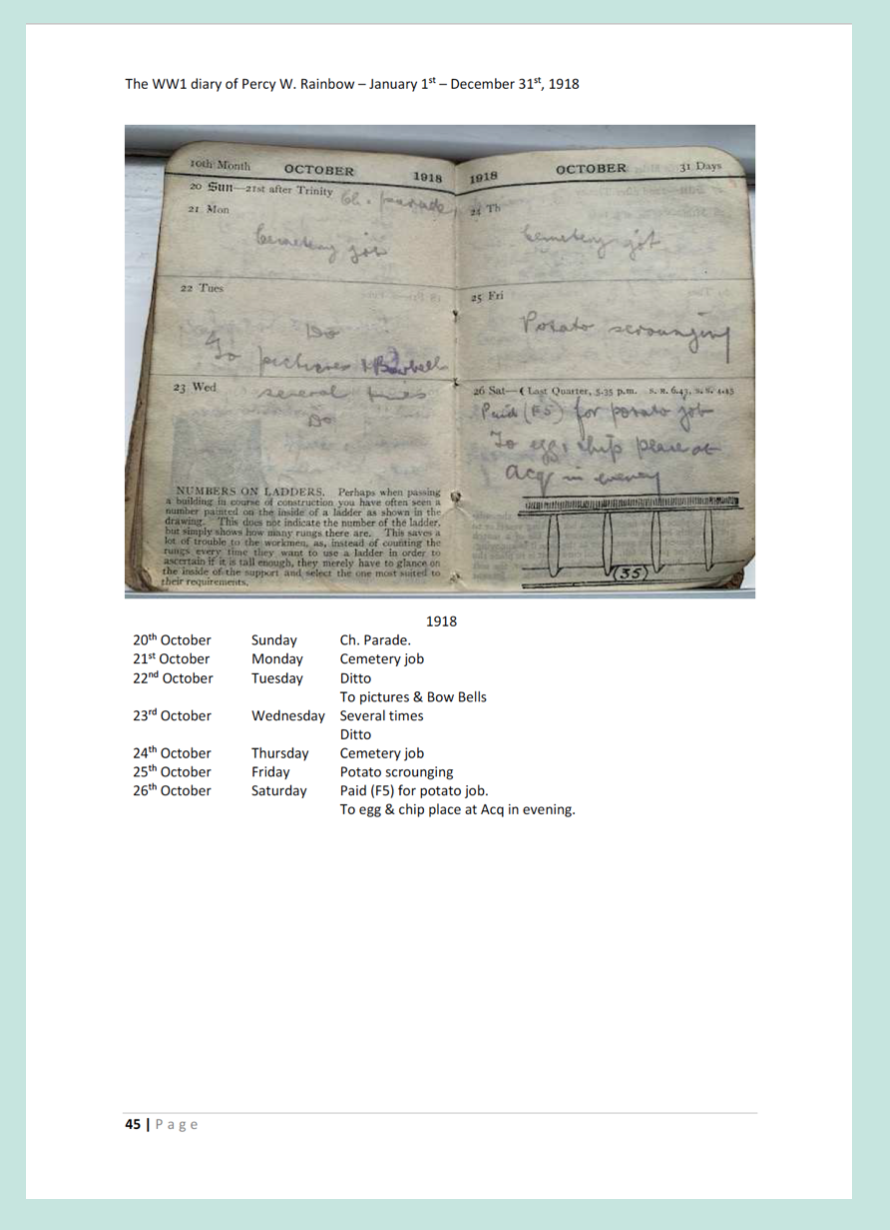 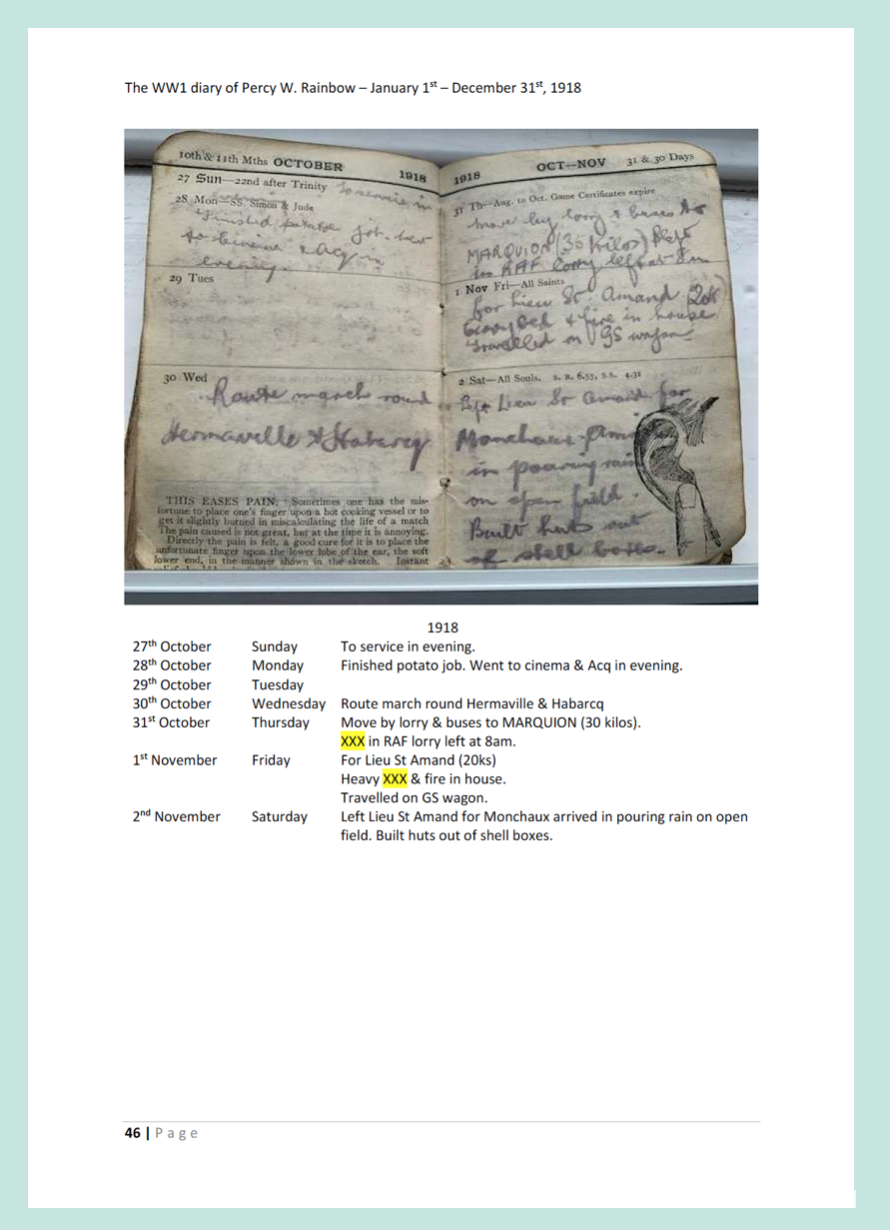 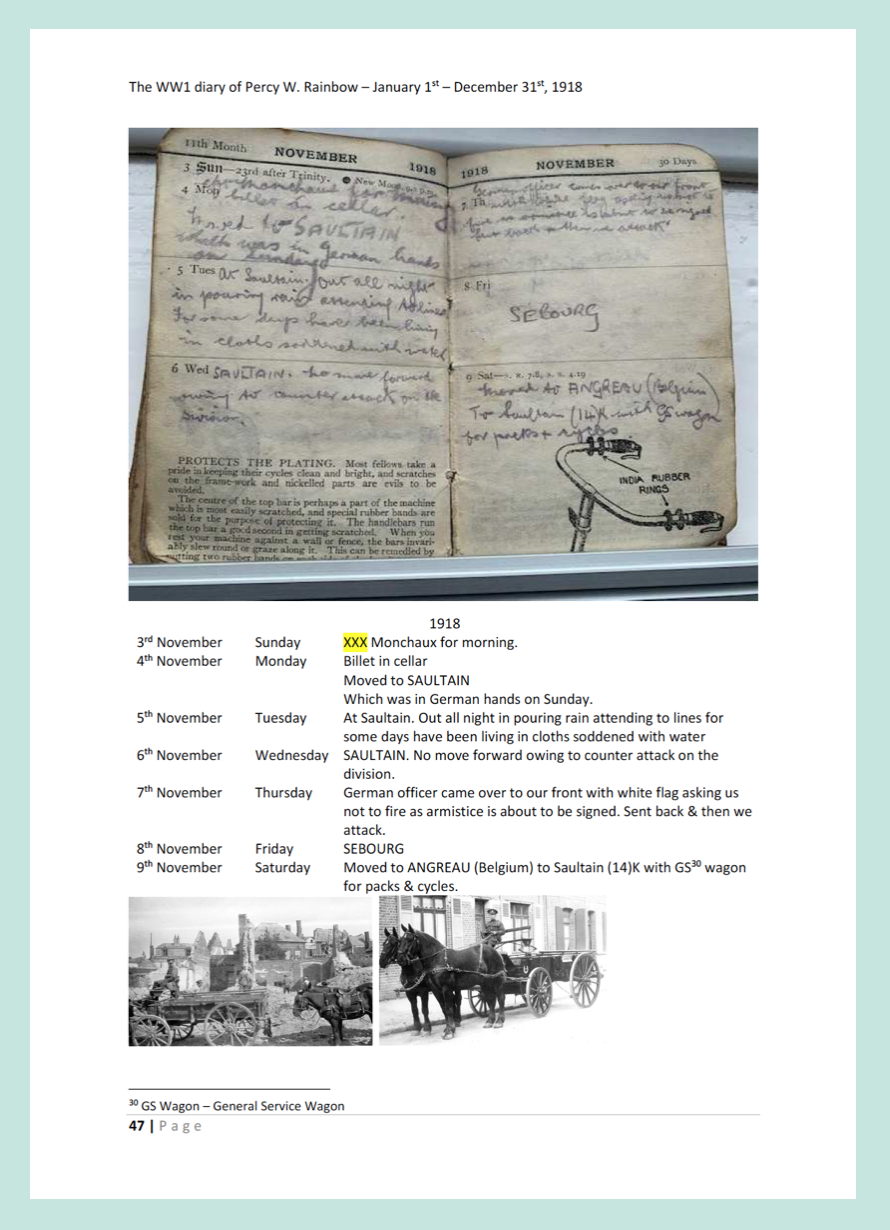 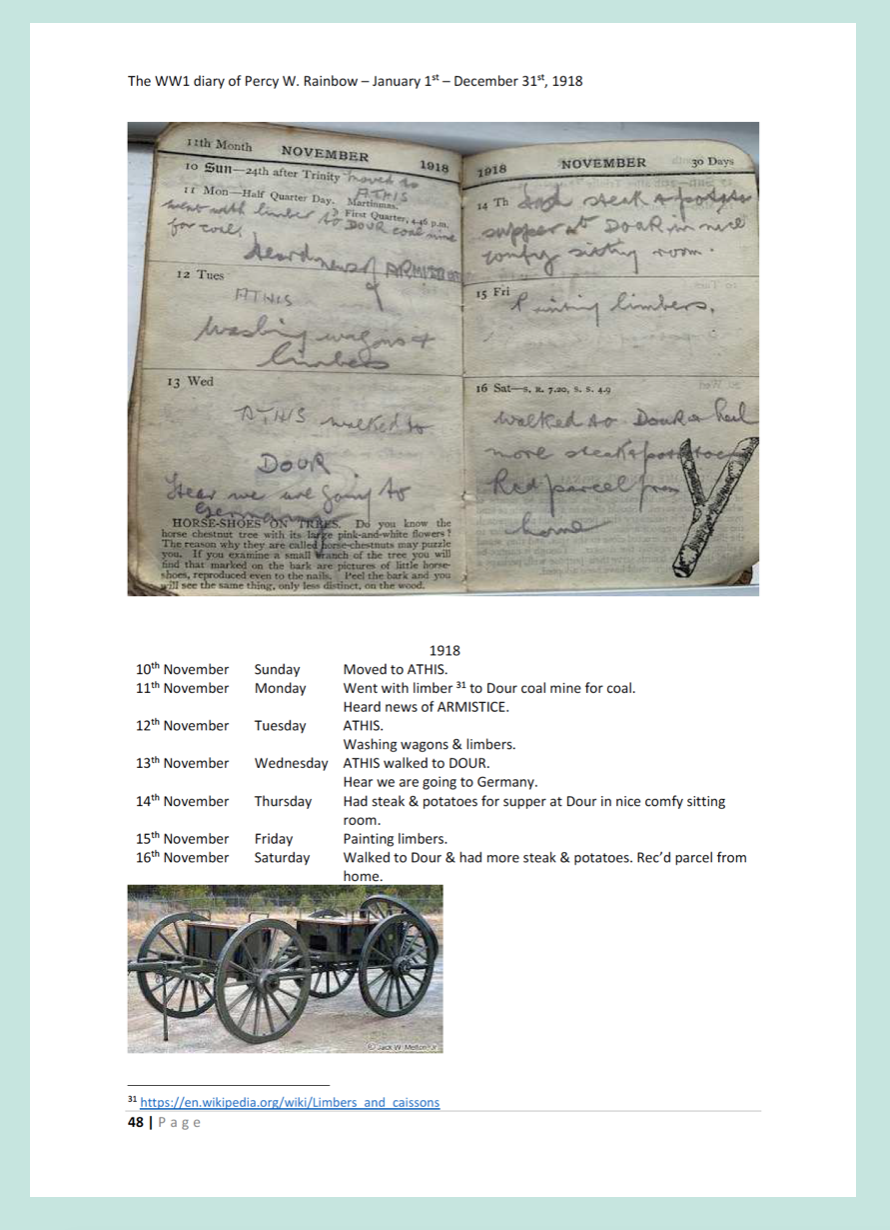 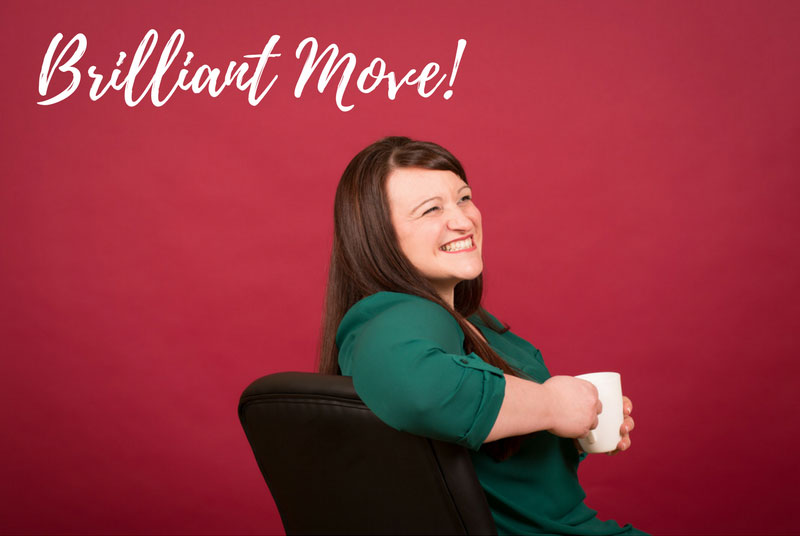 We will use the information you provide here in accordance with our Privacy Policy which can be viewed here. You have the right to withdraw your consent to be contacted at any time.
Our website uses cookies to improve your experience. You consent to our cookies if you continue to use our website. Accept Read More

This website uses cookies to improve your experience while you navigate through the website. Out of these, the cookies that are categorized as necessary are stored on your browser as they are essential for the working of basic functionalities of the website. We also use third-party cookies that help us analyze and understand how you use this website. These cookies will be stored in your browser only with your consent. You also have the option to opt-out of these cookies. But opting out of some of these cookies may affect your browsing experience.
Necessary Always Enabled

Any cookies that may not be particularly necessary for the website to function and is used specifically to collect user personal data via analytics, ads, other embedded contents are termed as non-necessary cookies. It is mandatory to procure user consent prior to running these cookies on your website.